Work from home make PC sales had a significant rise for the first time in a very long time ?

Early 2020 we had the usual trend of the decline of personal computer sales: 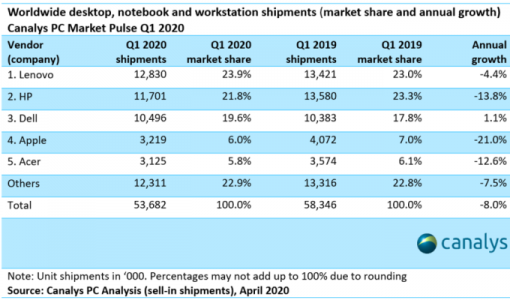 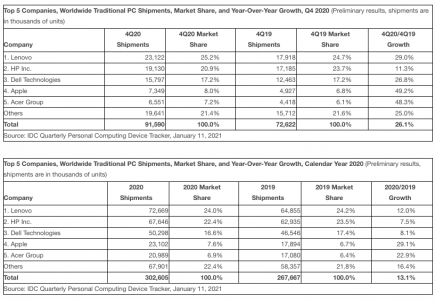 That give an idea of the pressure hardware supply chains must have, it is not just gaming PC/consoles that exploded, but regular work computer seem to have got quite the burst, over 300 millions annual sales.
D

One only had to go down to their local Microcenter or Best Buy to see this. Because people were going to be spending a lot more time at home a ton of people decided to build gaming rigs.
L

Lenovo, HP, Dell, Apple, Acer pre-build will have some gaming rigs for some of them, but mostly I would imagine they are not specially made for gaming computer.

But yes, even if only 5% of them has a someone recent discrete GPU attach (say a 60/40 split between laptop and desktop with 12.5% attach rate) that would be 15 millions video card to ship just on new computer sold (without upgrade on older machine) and I imagine completely custom rigs do not show up above, traditional PC being I imagine premade one.
L

I hate to repeat it again but... unprecedented demand at all levels of an already gimped supply chain.

Sadly most people I know still have a laptop on a desk in their home offices without so much as a docking station or real monitor(s). Even a lot of my programming co-workers are this way. The less technically inclined ones (not the programmers) even think laptops are faster because "desktops are so oldschool!" These are the same people who think wifi is better than ethernet. I guess minimalism and futurism have gotten conflated.
I

Biggest change I notice is there are absolutely no second hand large TVs in my country at all. Everybody needs their own TV to get space from their household.
M

learners permit said:
I hate to repeat it again but... unprecedented demand at all levels of an already gimped supply chain.
Click to expand...

Even autombile sales are getting bottlenecked because of chip shortage

In some cases, the automakers are slowing production of slower-selling vehicles and diverting more chips to higher-end vehicles like pickup trucks and SUVs. This implies the epidemic may accelerate the ongoing US shift towards SUVs and away from passenger sedans.

“This is absolutely an industry issue,” Toyota spokesman Scott Vazin told the AP.
Click to expand...

Marees said:
Even autombile sales are getting bottlenecked because of chip shortage
Click to expand...

How's this hitting INTEL? Intel has its own fabs unlike garbage AMD.
L

Iching said:
How's this hitting INTEL? Intel has its own fabs unlike garbage AMD.
Click to expand...

I am not sure, how would Intel avoid the pressure of an explosion of demand just because they own fabs:
https://www.sourcetoday.com/supply-...capital-expenditures-to-combat-chip-shortages
https://www.tomshardware.com/news/intel-chipset-shortage-motherboard-prices-skyrocket

And they had many supply issue pre-pandemy that is still ongoing (that why they are trying to buy more from the TSMC of the world instead of mostly making everything in house).
D

Am I the only one who thinks there is something wrong with the title of this thread?

dub77nj said:
Am I the only one who thinks there is something wrong with the title of this thread?
Click to expand...

Yeah, I keep reading it over and over and it doesn't compute. I understand what was meant though.

In any case, it doesn't take a genius to realize with all these people WFH and kids on Zoom school, yeah, there are gonna be a LOT of PC sales.
You must log in or register to reply here.
Share:
Reddit Pinterest Tumblr WhatsApp Email Share Link
Top