How many SSD drives have you purchased?

Recently bought two more 2TB drives just so I could have more space after ditching my HDDs.

but I purchased 9 drives total which you would think surly would be enough the problem remains lack of Sata ports mainly 6 on most boards.,
Some boards have 8 or you could buy an adapter. The low capacity of SSD drives it the main problem 256 was about good as it would get back in 2014.

x2 256 gig drives not using as backup drives not connected to my PC
x1 500 gig drive for my WIN OS
x4 1TB drives you would think this would be enough I mean 1TB is pretty big right unless you have COD MW installed.
x2 2 TB drives which are pretty nice only have one installed one is in the mail.

I just couldn't spurge for those 4TB drives I mean they are still about 450.00 for one drive
which is the price of a really good motherboard or top of the line Intel Chip

The thing that really ticks me off I spent the same amount of money on those 256 gig drives for those 1TB drives.
Back then 1TB drives were the price of the 4TB drives today. I purchased a 256 gig drive for one game back in 2011 which was Planetside 2.
loads times were like more then a minute with a regular HDD.

I have bought around the same number. Although, I am down to 500gb in even my gaming rig as I've given most drives away to family as I can sympathize with someone who has a spinner lol

I just install 2 or 3 games at a time and when I finish them, I uninstall.

The drives you gave away all low capacity?

Update canceled the order for my 2TB drive just isnt' worth it I mean replacing 1TB with a 2TB only gaining 1TB. I mean if the 4TB drives came down in price I would all over those.
Last edited: Jan 17, 2021

Comixbooks said:
The drives you gave away all low capacity?

Update canceled the order for my 2TB drive just isnt' worth it I mean replacing 1TB with a 2TB only gaining 1TB.
I mean if the 4TB drives came down in price I would all over those.
Click to expand...

Did a rough "in my head" count this morning and came up with about 16 just for me, plus a few more for family and friends. Most are low capacity (120-256GB) drives of one sort or another for systems that won't see many programs or user data installed on them (Boinc machines, HTPCs, my file server and pfSense router). Only my main rig has the heavy hand of flash capacity going for it. I still rock the rust for bulk storage on the server and backups.

Best purchases were the 900p and Fusion ioDrive, worst was the Intel 330. Loved how the 330 would just lock up the system for 30 seconds or more at random.
Z

I think I've bought 9 for myself, 3 for others. The first one was an Intel 80GB in 2008. Most of them were average to fairly large for the time with the exception of the 500GB M.2, which is the boot drive in my file server. Only one failure so far, and of course it was the Samsung I bought dad for Christmas years ago.

*On Order. Decided I needed a games drive after installing CoD: Cold War. It's nearly 150GB with the 4k texture pack.

Damn, dude...21 drives! Share a pic of how you have all that crammed in your case?

And why SATA instead of a few NVMe? (just curious)
L

Probably 35 or more varying in size depending upon their use case. I refurb laptops for a little extra cash and always replace the spinners to speed them them up and reduce power consumption to offset the faster cpu I add when possible.

And I might buy another one today.. cant decide if I want a sata drive or if I want a PCIE adaptor and another NVME. I have two other computers I can put in service for my kids, so they will get my 545S's. As much as I would like to try a new HDD, I have turned into a snob and not sure if I can bring myself to do it. I have 2.5TB of HDD space in my pc already, but they are not spinning until I want to back up some stuff.
C 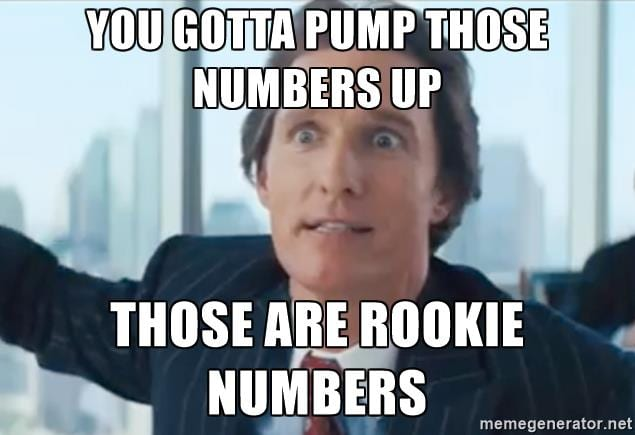 I think I waited a while until I got my first SSD. I think it was a 240gb crucial sata ssd? Since then, I've probably bought 6 more drives. The latest two are 2 1TB nvme m.2 drives from XPG.
I installed Call of Duty Black Ops Cold War, Modern Warfare, and Warzone and one of them and instantly lost around 300GB of room.

This is what I have internally in my main rig 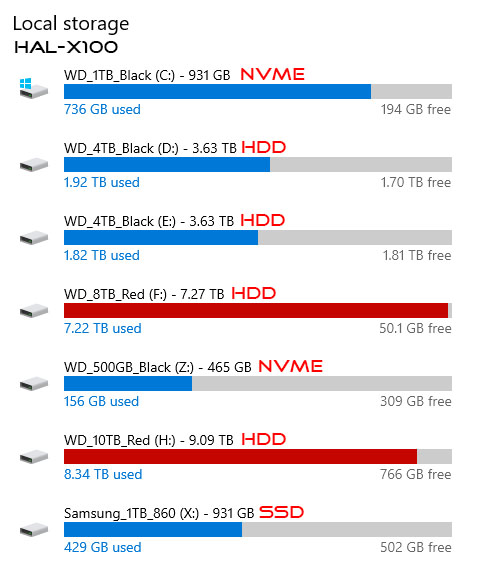 I've bought over 30 SSD's but some were for builds I sold or client machines were I upgraded their spinner.

I have these just sitting around.
Probably going to slap that 128GB Crucial into my HP 23" touchscreen PC since the 1TB spinner is kinda slow. 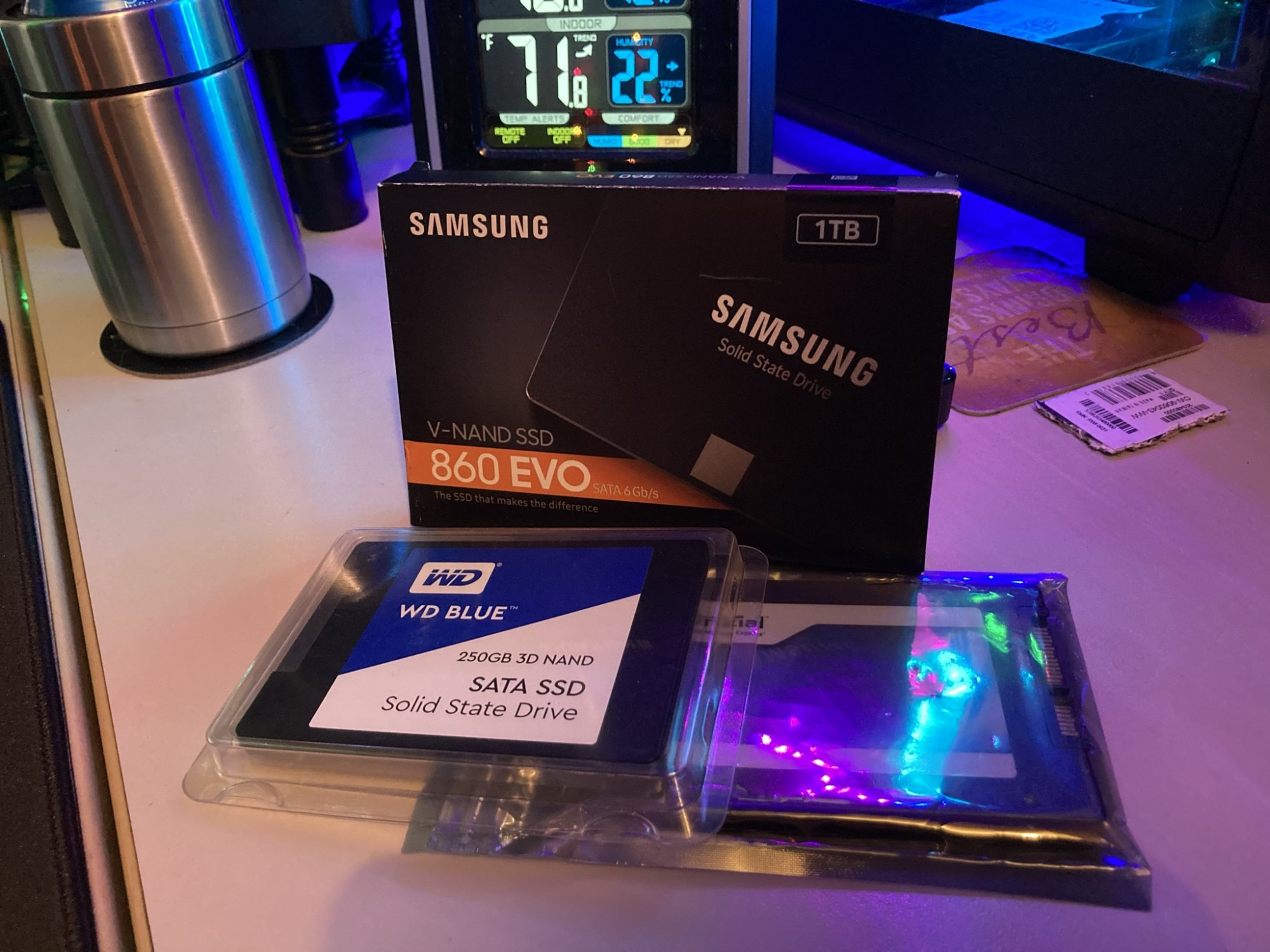 Over the holidays, I switched to all NVMe and SSD in my PC: 1TB 970 Pro NVMe, 2TB 970 Evo NVMe, 4TB 860 Evo SSD. I bought a couple of 8TB external Lacie drives for storage/backups and am quite pleased with how it's worked out.
T

Uhhh.
Starting with a 120GB near first gen intel SSD, then hell if I can even remember everything after that.
I think I've had 3 more 2.5inch SSDs, 240GB, 512GB and 1GB sounds about right.
I know I've had 7 or 8 NVME SSDs, starting with an ADATA SX8000 that wasn't stable at all and I eventually tossed after too much data corruption.

I have four in my current system, two in my wives system, both of our laptops are using NVME boot drives. I have one spare that's gonna be turned into my future media server boot disk...

Since SSD's came out? Sheesh. Over a dozen I'm sure, for various computers. No idea. I only have one computer left with a spinning drive as a boot drive, and that's on purpose.
D

I don't have an exact number of total purchased for myself and friends/family but for just myself....

Most of them started life as a boot drive but now live in a drive bender array for storage of everything that isn't a video file. The FisionIO drive is a cache drive (primocache ftw) for the hard drive array and works beautifully.
K

Comixbooks said:
The drives you gave away all low capacity?

Update canceled the order for my 2TB drive just isnt' worth it I mean replacing 1TB with a 2TB only gaining 1TB. I mean if the 4TB drives came down in price I would all over those.
Click to expand...

You missed the part where you keep your 1TB drive installed and have a total of 3TB.
T


I'm probably missing a few, but this is definitely most of them

Despite the glaring flaw (can't remember what it was, it was so long ago) that required a "might erase your data" firmware update, I still have, use, and love my Vertex 3 MaxIOPS 120 and Agility 3 240s.

OCZ had some good stuff and some terrible stuff, those ended up good for me. Sandforce, I know, was bought out after the 2200 series successes, but never produced another chip that went anywhere. IIRC there was a 3000 series but it was so far behind it was canceled in the end, and that's the last I ever heard from the company.
A

All my SSD's / NVME's are Samsung and roughly bought in this order...

I still store all my backup files on a platter drive though that is 8TB. They may suck for gaming anymore, but they are still great, cheap and reliable for archiving things.
T

This picture gives my organized OCD mind an aneurism.

I'm at 25 or so SSD's. Half for me, rest for family/friends builds.

Wow, I have bought a ton, roughly 25 throughout the years starting with 32 gb ocz drive. I have really only had 2 out right die i think both ADATA ones. I think I might be missing something though as I only currently have one in all machines 5x in house (nvme 512gb, and 1tb drives inland pros) and then still have mechanical for large storage drives mainly WD Reds 8tb (5x), 3tb 2x in kids gaming pc. I guess I have not really used sata expansion cards or mobos with more than 4x stat connectors though.
L

Grebuloner said:
Did a rough "in my head" count this morning and came up with about 16 just for me, plus a few more for family and friends. Most are low capacity (120-256GB) drives of one sort or another for systems that won't see many programs or user data installed on them (Boinc machines, HTPCs, my file server and pfSense router). Only my main rig has the heavy hand of flash capacity going for it. I still rock the rust for bulk storage on the server and backups.

Best purchases were the 900p and Fusion ioDrive, worst was the Intel 330. Loved how the 330 would just lock up the system for 30 seconds or more at random.
Click to expand...

I couldn't be happier with my 280GB Optane 900P. Solid purchase at the time. It came with a code for an in game ship for Star Citizen that I sold for $115. I wish I had purchased more honestly.
V

Starting from who knows when:

Personally, in my house it's a 1TB SK Hynix Gold P31 boot drive on my PC, along with an engineering sample 2TB Intel U.2 NVMe SSD that was never actually released to the general public. I had some 1TB Samsung 850 EVOs prior to that, along with a 25X GB 840 Pro drive to boot from.
In my server it's a pair of 120GB SSDs to boot from, and another of the Intel 2TB units.
Wife's PC has a Samsung 850 PRO 1TB. Arcade, HTPC, and laptop all run Samsung 850/860 EVO 250GB drives.

Now then, if we want to talk about drives purchased and I include for work (I build servers), then it's at least 300+ SSDs from 1TB to 8TB in size

I've purchased and owned about 20-30 HDDs since I bought that first 1 or 2GB IDE Maxtor, I think. I was also a victim of the infamous IBM Deathstar (which failed almost exactly 1 year after purchase). My latest hard drive purchase is probably the one I'm most exicted about - a 2TB XPG SX8200 Pro NVMe PCIe M.2 2280 SSD. It will be fast as t*ts as soon as I install it in the Asus z490-E MB I'm waiting on. Vroom vroom

Also looking forward to removing all those 128-256GB SSDs I've had in my box over the years.

None so far, lol, only used spinners my whole PC life. Closest I used a 1TB hybrid drive with 8GB flash cache.
Planning buying a 2TB NVME to use in the 2nd m.2 slot of a laptop I'm getting. A Micro Center brand for $185.
You must log in or register to reply here.
Share:
Reddit Pinterest Tumblr WhatsApp Email Share Link
Top