Hello,
Looking for some suggestions on cooling my cabinet. Long story short, the kids have closed the doors while playing and cooked two PS4s while I’m not home (white one just got back from Sony a few months ago as it got so hot LEDs fell off the board, black one was bought used in may, and is dead. No they normally aren’t stacked like that.)

I don’t want them cooking the PS5. Also the Telus DVR is hot.

My builder in all his glory, used a kitchen cabinet built in. There is a solid wood top. I’d rather not drill out the top, as things like amazon packages etc get set there, and that’s gonna get covered.

I looked at AC Infinity on amazon. Pretty pricy, but should do the trick. If they would move enough. I don’t want to drill the doors. So what I was thinking was one of a couple things.

Intake on right side, one per shelf, and go into the wall cavity. Opposite side is the hallway. I could put in a cold air return cover there. And pull air from hallway, into cavity, and into cabinet.

Exhaust on the left side (one per shelf perhaps) and pump it into the space behind the fireplace. This is a fully enclosed space. Except the back is open under the tub behind it. The top is sealed from attic etc. Though this space would fill up quickly with hot air, and flow would really suffer. So I could put a vent, or duct it to behind the TV. I have quiet a bit of space above the bracket and the stone.

With that said. I don’t know how much flow I would need. With the doors closed she is gonna get hot quick. I mean the PS4 I could barely hear, then I open the doors and I felt heat. PS4 screaming. The first one ended up not booting and just cycling the light. Which is usually CPU socket soldier issue. Tried shimming it down for more pressure. No go. At that point I noticed the small blue LEDs on the front of the board, half had slid off the contacts. So hot the soldier melted.
The only other thing I can think, is to cut the wood from the centre of the doors, and install some mesh. Though the wife would be pissed.

I can also get some 6-10” AC cooling fans for VFDs etc, and use those over AC infinity.

I could also use multiple computer fans 140-200mm and some form of PID controller. I wouldn’t want them all full time. But rather ramp up and down as needed, and turn off if not needed.

Any suggestions? Any idea how much fan I would need? Is AC infinity the route? Is there another system/brand?

I could also put in a 4” inline fan, and muffle it.

Here's my thread (and my solution) on this topic.
S

Issue with mine vs that, is mine is a built in cupboard. I don’t have a space behind it. I can’t just put two fans in the rear. As that would just go into a wall cavity. And thus have no flow.

I think I’ll be going with a 4” split across the shelf. Though not sure how that would work. Perhaps T it and put in two sep 4” vents, into one fan.

I’m going to explore vent locations more. Not sure about that heat behind the TV.
Last edited: Jan 1, 2021
D

I don't see an easy fix.
Cheapest way would be removing doors.
You might be able to modify doors to remove glass and replace with screen. If it still runs too warm mount a couple of fans on inside pulling air in onto components. If middle shelf can be removed, cut it so there is a couple inchs of gap behind and in front. I'm a cabinet maker so I would cut front of bottom shelf back a couple inches with only a section in center for doors to close against (to keep something/someone pushing doors in too far and breaking them).

That area where the current cabinet is has a lot of wasted space. Install a shallow depth glass door rackmount unit in that area. Like this: https://www.walmart.com/ip/NavePoin...2520969?wmlspartner=wlpa&selectedSellerId=986 --- I use this same rack in my computer room when they had them for $68 a few years back. 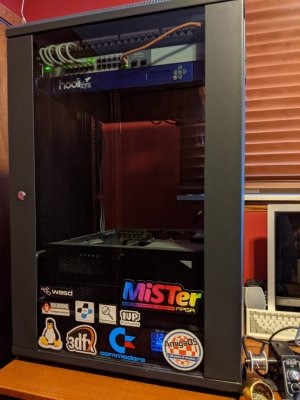 Then you can either wall mount it or put casters on it, and easily do a bottom intake and top exhaust on it. For the fan control, you can use one of these: https://www.amazon.com/AC-Infinity-CONTROLLER-Thermal-Controller/dp/B0797QK7JW
Last edited: Jan 5, 2021
S

w1retap said:
That area where the current cabinet is has a lot of wasted space. Install a shallow depth glass door rackmount unit in that area. Like this: https://www.walmart.com/ip/NavePoin...2520969?wmlspartner=wlpa&selectedSellerId=986 --- I use this same rack in my computer room when they had them for $68 a few years back.

Then you can either wall mount it or put casters on it, and easily do a bottom intake and top exhaust on it. For the fan control, you can use one of these: https://www.amazon.com/AC-Infinity-CONTROLLER-Thermal-Controller/dp/B0797QK7JW
Click to expand...

My wife would never go for the removal of the cabinet. I think I’ll try a 4” online infinity with temp control. I’m going to look at plumbing it into my mech room. It’s directly below and about 6’ over laterally.
You must log in or register to reply here.
Share:
Reddit Pinterest Tumblr WhatsApp Email Share Link
Top